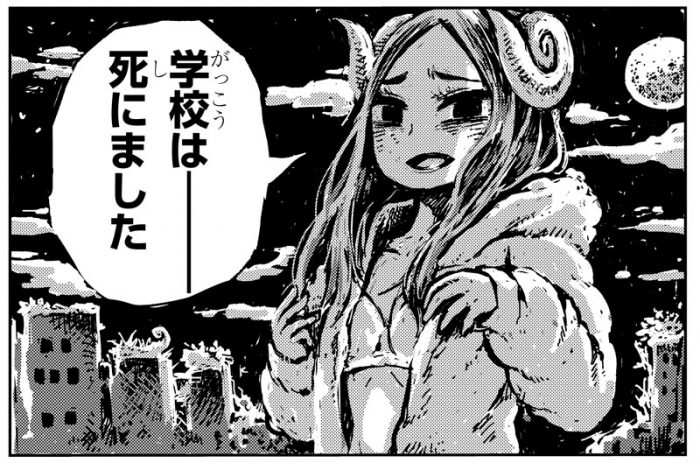 Mangaka : Yoichi Abe
Publisher : Seven Seas Entertainment
Genre : Fantasy, Romance, Supernatural
Published : March 29, 2022
Have you ever wondered how the world will end? Perhaps you’ve even contemplated being the lone human left alive. Well, we did, and our imagination sure has gone wild. We can’t imagine a world where we’d actually be enjoying ourselves, let alone able to survive alone. If your version isn’t as dark as ours, then that’s a good thing. But regardless of what kind of post-apocalyptic scenario you’ve come up with, we’re pretty certain it’s nothing like the world in Sheeply Horned Witch Romi.
Contains Spoilers

Discussion Time
Sheeply Horned Witch Romi is set in a time wherein the entire world has fallen asleep. Everybody is in deep slumber, and only one being remains awake – a sheep-horned witch. Since being alone isn’t really a fun experience for anybody, she uses her magic to wake up her senpai. Surprisingly, said senpai is rather gung-ho about being awakened in a world where only the two of them remain conscious. And so, their daily life together begins.
1. Wacky, Mindless Fun
Sheeply Horned Witch Romi doesn’t take itself too seriously, and neither should its readers. It’s a mayhem of ideas put together, and the result is surprisingly an entertaining read. It somehow retains the innocence of young teens, while still maximizing its fantastical elements through unpredictable and wacky humor. The plot is also rather simple, and it does not require much thinking either. The fact that it only really gets going about halfway through makes the first half seem like filler chapters. All of that being said, reading the first volume of this manga takes up little headspace – in a good way.
2. A Festival For Sheep Lovers
The one thing this manga isn’t lacking in is sheep content. Everything is about sheep. Sawada, the titular witch, is equipped with sheep horns. But unlike ordinary horns, hers are soft and squishy. And that’s not all – the only creatures awake in the school other than the two main characters are a herd of magical sheep. Sawada reveals that these sheep are the culprits behind the school’s slumber. Much later in the story, Sawada more actively starts to control the sheep. She uses them to spread her miasma, which is also said to be protecting the school, and also turns the sheep into her bipedal servants. So, will these strange but familiar creatures be to your liking? That is a question only you can answer.

1. Just What In The World Did I Read?
This sentence pops up in our mind every now and then while reading this manga. The plot, design, and even the jokes make us think that the mangaka wrote or conceptualized this while having a fever dream. Everything is so wonky that it’s hard to believe someone sober has brought it into our world. While some may enjoy such content, others will surely be utterly confused. Honestly, nobody can blame them. There is little narrative progression during the first half of the volume, and when the story does start, it brings the readers back to the past.
Final Thoughts
Sheeply Horned Witch Romi is interesting, but it definitely isn’t for everyone. While it does offer great content for a mindless reading session, it’s very weird – even for our tastes. However, that doesn’t mean it’s without strengths. The manga does have its cute moments, usually in the form of youthful innocence, and a unique sense of humor, in the form of grotesque jokes.
If you’ve already read the first volume of Sheeply Horned Witch Romi, we’d love to know your thoughts in the comment section below!
Writer

Author: Christian Markle
I am a copywriter, proofreader, and editor. I love watching anime, reading manga, and writing my own stories. Watch out in the future as you may see one of my works one day. Manga and anime were big parts of my childhood. I grew up watching Yu Yu Hakusho, Slam Dunk, One Piece, and Dragon Ball Z. Those were probably one of the happiest and most carefree days of my life. In fact, most of my values are probably molded by manga. No, that’s not an exaggeration.
Previous Articles
Top 5 Anime by Christian Markle