Classroom of the Elite: Light Novel vs Manga – What Went Wrong? 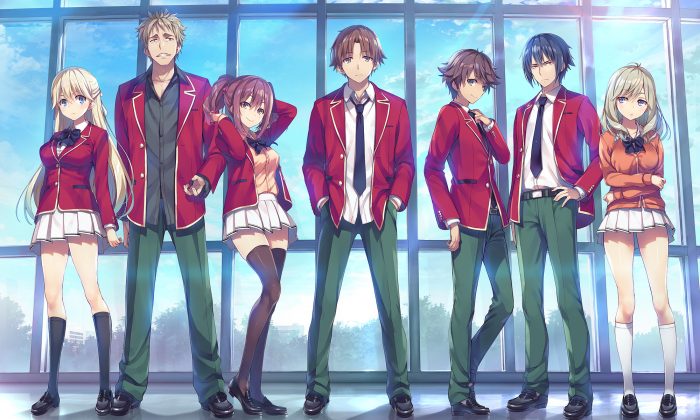 A little while ago, we reviewed the first volume of the manga adaptation of Youkoso Jitsuryoku Shijou Shugi no Kyoushitsu e (Classroom of the Elite). At the time, we hadn’t read the original light novel, so we weren’t sure how many liberties the manga was taking with the story.
Since writing that article, we’ve had time to read the first volume of the light novel. We absolutely loved it, and devoured the whole thing in just a handful of days! Reading the novel, however, has prompted us to ask one very important question…
What went so badly wrong with the manga?!

If we had our chance to review the manga again, we’d have quite a few choice words to offer – and so today on Honey’s Anime, we’re doing exactly that! It’s time to compare Volume 1 of Classroom of the Elite’s light novel to its lesser-quality manga adaptation.

Our English edition of Classroom of the Elite’s light novel comes in at 384 pages (we have the Seven Seas 2019 edition). And for reference, the digital version of the manga volume we read has 195 pages.
Elementary-grade math teaches us that the manga should therefore contain roughly half the content of the novel, but instead, it feels like only about every fifth page was adapted. In a flurry of torn-up pages and half-scribbled notes, whoever planned the manga jotted down the main plot points they had to cover, before blazing ahead without ever glancing back at the source material.
To be clear, we’re not talking about removing visual descriptions – that’s a given in a manga adaptation. A picture tells a thousand words, after all. No, we’re complaining about the context behind many of the character interactions just disappearing into the void. All of this reduces our main character, Ayanokouji, to an empty pilot to drive the plot forwards.
Ayanokouji greatly struggles to make friends in this strange new high school, likely because he desires “avoiding trouble” at all costs. That doesn’t mean he’s a loner, however, unlike his classmate and walking-tsundere-trope, Horikita, who often proves to be a thorn in his side. At least most of their conversations made the cut into the manga, but Ayanokouji’s failed attempts to form friendships are sidelined into singular panels without much gravitas.
When our class of misfits and failures, Class D, learns that their academic futures are an endangered species thanks to their awful behavior and test results, Horikita goes into mom-mode and forms a study group. In the manga, this event is reduced to roughly four pages, and entirely cuts out Ayanokouji’s actions. In the light novel, Ayanokouji takes great pains to help Horikita form the study group, and when he eventually fails, he turns to the bubbly (but two-faced) Kushida, whom Horikita seemingly hates.
In the manga, Ayanokouji immediately goes to Kushida, seemingly betraying Horikita’s trust without a second thought, while in the novel, it’s a “last-ditch” effort. In fact, the tension between Kushida and Horikita isn’t particularly obvious, which weakens the character-building that the novel takes a solid amount of time to establish.
Overall, reading the light novel after reading the manga is like reading the actual book after the CliffsNotes. Or rather, it’s like reading the book after reading a sticky-note-sized summary of the CliffsNotes – it feels like we were sold a horribly reduced version of something rather great.

Okay, so we’ve sounded pretty salty up to this point. We totally understand that there’s a place for manga adaptations of light novels – that’s not what we’re mad about. In fact, sometimes we even prefer the manga adaptations, since some light novels are rather chunky and can be dense to read.
For example, look at Arifureta Shokugyou de Sekai Saikyou (Arifureta: From Commonplace to World’s Strongest). The light novels tend to involve a lot of traveling around and camping out during adventures, with a lot of visual descriptions that can easily be condensed or omitted in the manga. We’ve stopped reading the Arifureta novels, and we’re reading the manga instead, because the manga adds extra comedy and really amps up the fight scenes.
The same goes for Yahari Ore no Seishun Rabukome wa Machigatte Iru (My Youth Romantic Comedy Is Wrong, As I Expected) – otherwise known as OreGairu. The narration of the eternally antisocial Hikigaya can be dense and a little too psychological at times, while the manga adaptation draws back from the intense thought processes and lightens the mood. It’s simply a more enjoyable way of consuming the story, and we can see what the manga is looking to achieve.
We have no idea what the Classroom of the Elite manga is trying to do.
A plot speed-run, perhaps? The manga has removed a huge amount of characterization, and added in ridiculously ecchi moments that feel awfully out of place. In one striking example, a scene in the novel shows Ayanokouji questioning Horikita’s previous “experience” with high school clubs (and yes, “experience” is an implied euphemism here). The joke is done and moves on, but in the manga, it’s presented as an ecchi vision of Horikita performing some rather adult-rated actions that definitely shouldn’t be performed with a popsicle.
Again, we’re not against adding elements (such as ecchi drawings) to an adaptation. We’re all for some much-needed fan service, but adding or removing elements has to make sense. Where Arifureta’s manga lightens the mood with comedy, or OreGairu’s manga dampens the psychological melancholy, the manga adaptation of Classroom of the Elite somehow manages to miss the mark entirely. 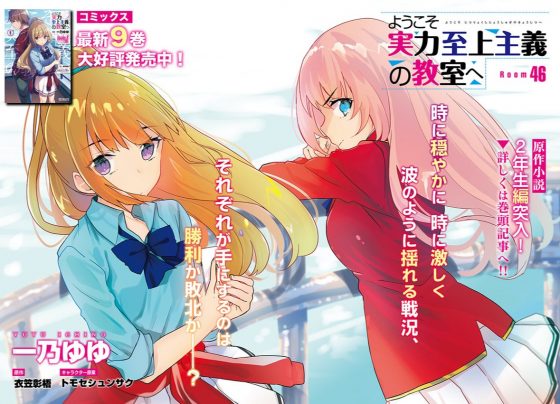 We appreciate that adapting somebody else’s work into a new medium is an extremely difficult job, and not one we’d want to have! But there’s an art to the adaptation, a way to take the original material and bring it to life in a new format while keeping true to its origins.
Having been able to compare the light novel and manga versions of Classroom of the Elite, Volume 1, we honestly couldn’t recommend the manga unless you have an aversion to reading long passages of text. If you don’t have the time or means to read the novels, then the manga will technically hit the “plot points”. At best, you’ll be missing out on vital character-building, and at worst, you’ll come away with a misinformed view of the characters themselves.
Phew. We think our sodium levels are finally calming down now… and with that, the floor is open to you, dear reader! Have you read Classroom of the Elite?
Have you encountered manga adaptations of light novels like this before? We’d love to hear from you down below in the comments, and as always, thank you for reading!
Writer

Author: Brett Michael Orr
I’m a writer, gamer, and reviewer of manga & light novels, from Melbourne, Australia. When I’m not creating a new world, I’ll be absorbed in a good JRPG, watching some anime, or reading up a storm!
Previous Articles